The wisdom of a mother 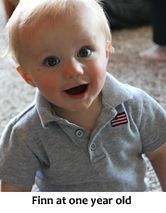 This is a story about Finn, a sweet baby boy who was born last November. Finn's parents, Sarah and Jonathon, live in Montana. They traveled to Arizona so that Finn could be born near grandparents. Jonathan emailed me shortly after Finn's birth because breastfeeding was not going well. Despite trying everything for several weeks, Sarah could not get Finn's latch comfortable. She ended up pumping to give Finn her milk. But by then, it hurt to even pump. I was at a loss and wondered if Sarah should wean Finn. Little did I know what was to come...

When Finn was one month old, Sarah and Jonathon drove home to Montana. Finn developed a fever on the way home, and they drove two hours through a snow storm to Bozeman, Montana, to the emergency room. The doctors determined that Finn had late onset GBS meningitis and had suffered six disruptions of blood and oxygen to his brain (known as infarcts). After six days in the Bozeman hospital, Finn was air flighted to a Seattle hospital. At both hospitals, when the doctors learned that Finn was receiving Sara’s milk, they were thrilled.

Finn spent the next two weeks undergoing EEGs, MRIs, spinal taps, PIC lines, and antibiotics. He was a very sick baby. Just when they thought he would need brain surgery, he turned the corner. Finn’s father sent an email to friends with the following precious words: “Finn is battling the infection, powered in no small part by his mom’s magical breast milk, which she faithfully pumps every three hours round the clock. Sarah is my new hero. I think I am going to get her a cape for Christmas.“

I am pleased to report that Finn survived his ordeal with meningitis. After a month in the Seattle hospital, Finn was well enough to travel back to his home in Montana. He has amazed his doctors by reaching every single developmental milestone right on time. (He also learned to breastfeed once a doctor in Seattle solved his poor latch by clipping his frenulum.)

Finn’s story confirms my incredible trust in mothers. Sarah was determined to feed Finn her milk. Her wisdom paid off. Today, Finn is a happy and healthy toddler who had his first fishing lesson this past summer (his dad is my husband’s favorite fishing guide!). And I am a wiser lactation consultant for learning once again to believe in the wisdom of mothers. Happy Birthday, Sarah, Jonathan and Finn!