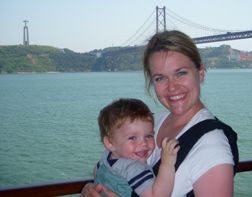 In 2009 I was given the opportunity of a lifetime. My husband and I traveled to Europe with our parents and our 18 month old son, John, who was still nursing frequently. We boarded our long overnight flight to Italy and arrived in Rome jet lagged, but ready to sight see. I realized then that John had not asked to nurse since we landed.

I was following a gentle child-led weaning method called “don’t offer, don’t refuse," so even though John asked regularly to nurse, I did not think much of it, assuming we were all just tired. That evening as we went to bed, John came over and pulled up my shirt. Instead of nursing, he laid his head on my belly and fell asleep. I was amazed that we had gone a whole day without nursing. Little did I know that our plane ride to Italy would be the last time I breastfed my firstborn son.

Would I have acted differently if I had known he was nursing for the last time on the plane? Would I have made a mental note of his relaxed little body and how his eyelashes looked so long or the way it felt when he would wrap his little arm around my back as though he was also holding me? Even though I loved our nursing relationship there were many days I had wished for weaning... dreamt of the day I would have my breasts back and a little more sleep and a little more energy!

I never realized the emotional impact that weaning would have on me. I thought I was doing this all for him. But a year and a half after the birth of my colicky, but sweet, baby boy, I realized that nursing had been for both of us. Nursing was a life lesson in love, a love that was self sacrificing but rewarding for both of us beyond ways I can express.

The remainder of our trip John would come to me at bed and lay his head on my tummy until he fell asleep, no longer needing my milk but wanting to share a moment of the love that had been fostered through nursing. John is now a very busy 4 year old, but every once in awhile when he is snuggled up I will notice how long his eyelashes are and the way he puts his little arm around me and am overwhelmed by the bitter-sweetness of raising a child. I feel very lucky to have been given the opportunity to breastfeed my son. The experience helped me learn to love beyond ways that I knew how. Breastfeeding may end at weaning, but the impact of it lives on for a lifetime.

Libby is the mother of two young boys and is expecting twins.Libby is a nurse practitioner and a lactation consultant. She is also a member of the MilkWorks Board of Directors.