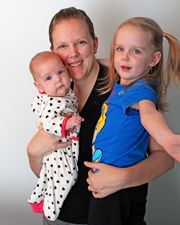 An online discussion among a group of friends recently turned to breastfeeding. The question was asked:

"For those of you that breastfed your 2nd (or 3rd) did you talk to your oldest about breastfeeding and how that works before the baby came? I breastfed my daughter until she was 1 but she hasn't been around any other nursing since then so she has no idea that is how the baby will eat. Should I go out and find a book or just explain it to her the first time she sees me feed the baby?"

The first few responses were enthusiastic "yes! definitely!" Some even included resources like a YouTube video of a character explaining breastfeeding to Big Bird on Sesame Street, another shared books like "What Babies Need" and "My New Baby". These were good ideas - one book is from Dr. Sears for goodness' sake. This sent me into major mama guilt - I had done nothing to prepare my toddler for the first time she saw me breastfeeding her baby sister. Had I totally failed my daughter by not preparing her for this? When she sees me nursing the baby is she consumed with confusion she can't express?

It only took me a minute to calm the irrational mom fears as I thought about my girl. She has seen me breastfeed her sister every day for 8 weeks. She has approached me and kissed her little sister on the head as she nursed. She has even asked "what's my sister doing?" to which I replied "she's eating," and that was always a thorough enough response to send her off to her next task. My daughter is very articulate for a two-year-old, and if she has questions, by golly, she asks them. This time, though, she just didn't have any. I reassured myself with her lack of questions. No, I hadn't sat my daughter down to talk about breastfeeding, but why would I? She, herself, nursed until she was 14 months old. Her first instinct at birth was to search for this source of food. I decided I would continue to answer her questions, but not initiate any talk or introduce any videos/books about it unless she asked. I shared my thoughts with my friends and didn't give it much more thought until last night.

Last night I was nursing the baby in my big chair and noticed my daughter was sitting in her little chair with her baby doll. Her eyes met mine, and she said "my baby is hungry too". She pulled up her shirt and laid her baby very sweetly across her lap. She looked around calmly, like she was patiently waiting for something, then looked lovingly at her baby, picked him up, and gently tucked the doll into his little bed. She repeated this a couple times before tucking him in and running off to find something else to play.

I was so relieved. I didn't need to explain any of it. She knows exactly what I'm doing. Maybe she doesn't know about ducts and let-downs, but she knows that her mama is feeding her baby sister, and that's exactly what she needs to know. She doesn't ask more questions about it because she doesn't need to. She understands.

I thought back to the discussion of preparation, and wondered why so many feel it's needed, and who it's really for. I know that at 30-months my girl is still a baby herself, and for older children more explanations might be necessary and more questions will be raised. Even on the TV show "Friends", Joey and Chandler have questions like "does it hurt?" and "how often can you do it?". But aside from answers to these simple questions, what do we need to be prepared for?

We prepare our children for a lot, but we also don't prepare them for a lot. Why does breastfeeding so often get grouped in with the unexpected things we need to be warned about? What is all the fuss about? Another mother had shared that her son really "got" breastfeeding when they saw another mother doing it. She said he understood then that this was a way all babies could eat, and not just something she did. Maybe, if nursing mothers didn't feel like we needed to hide in the corners breastfeeding is pushed into, it wouldn't be such a shock when children see it. Maybe if we didn't go out of our way to make such a big deal about something so simple we could help remove some of our anxiety about breastfeeding. Maybe, just maybe, if the next generation of babies saw that some babies have bottles and some babies breastfeed it would be a simple distinction rather than something we need to be prepared for.

After over-thinking my decision to not over-think, I've come to the conclusion that I like my approach to breastfeeding preparation. Even if I came about it unintentionally. I have girls that won't think twice when they see a mama breastfeeding. They will smile at her as she patiently waits. I would appreciate more smiles when I feed my baby in public. I know I won't be able to say this about every parenting decision I make, but I'm chalking this one up as a success.