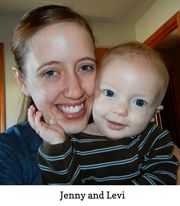 My son was born by Cesarean after about six hours of labor when we found out he was breech. He was a sleepy baby in the hospital. He would latch and suckle a bit, but for the most part the nurses had me pump and finger feed him. There was not a lactation consultant working during my hospital stay, so the nurses did the best they could. When Levi did latch, often his lip was curled in and it hurt. One of the nurses wondered if he might have a tongue tie. I thought she was making a joke. Babies don’t talk, so how could a baby be tongue tied?

During our first week at home, I fed Levi on demand every one to three hours. I triple fed him (which means that I gave him pumped milk after he was at the breast) for several days and then just breastfed him. When he was about eight days old, I felt myself holding my breath at each feeding because of the pain. I could see that my nipples were flattened when he was done with a feeding, and my nipples had scabs on them. Something was definitely wrong.

Lots of people weighed in on what was going on. I was told it was probably not worth it to get help as things would work themselves out, that I was just an over worried new mom, and that I needed to be patient. While my baby was healthy, I was in a lot of pain. I knew it couldn’t be normal to feel like crying each time my baby nursed. When Levi was nine days old, I called MilkWorks. It was a Sunday and one of their lactation consultants, Ann, came in to see me.

At MilkWorks I learned that my son in fact did have a pretty severe tongue-tie. He ended up having the frenulum under his tongue clipped twice. Ann had me pump and bottle my milk to let my nipples heal, while Levi matured a bit and was able to latch and remove milk more efficiently. This broke my heart because I felt as though I was missing out on bonding with Levi. Ann constantly reassured me, telling me what a great job I was doing. Once Levi went back to the breast, he would only latch with the use of a nipple shield, otherwise, it was still too painful and I was worried about getting cracked nipples again. Ann continued to reassure me that I was doing what was best for my baby, and that it just takes some babies time to latch without causing pain. I continued using the nipple shield for several weeks, thankful that Levi would nurse at all.

One day when Levi was 12 weeks old, I couldn’t find the nipple shield, and he was hungry. I figured one feeding couldn’t hurt me that much (after all, we had been occasionally “practicing” without it). Levi nursed, and I didn’t have pain. I couldn’t believe it!

Since then we’ve been nursing without it and there is no pain. Looking back, I feel that everything I did to overcome Levi’s early difficulties is so worth the wonderful nursing relationship we have now. I wouldn’t have it any other way. I’m proud to say my baby is seven months old and nursing like a champ. Without MilkWorks and their encouragement, positivity and support, I don’t know that I would have the nursing relationship with my little Levi that I have today.

Note from Ann, Jenny’s lactation consultant: When a baby has difficulty latching comfortably or removing milk well, feeding can be a very time consuming process. We like feeding a baby at the breast, even if it is just once a day, or if a mom has to use a nipple shield while feeding. A hospital grade pump like the Symphony is often necessary to make sure that milk removal is comfortable and milk supply is adequate. If a mom’s nipples are cracked, it is important to let them heal so mom is pain free. Babies get better at feeding as they mature and gain weight. While three months may seem like a long time, in Jenny’s case, Levi ended up doing well and breastfeeding became easy and enjoyable. Jenny’s patience paid off and Levi is now a happy, healthy nine month old who continues to nurse like a champ!