The Many Cultures of Breastfeeding 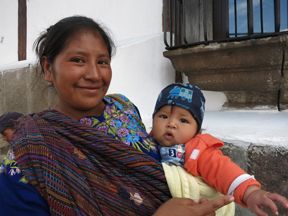 I recently had the pleasure of visiting the country of Guatemala and loved the hillside villages, local fair trade coffee plantations, incredible woven fabrics...and beautiful madres and bebes.

Charming Mayan babies nestle in handwoven slings while their mothers go about their daily lives. When hungry, the babies get fed. They get fed without their mothers covering up or feeling the need to find a private space. No one bats an eye or looks the other way.
I came away thinking that Guatemalan babies are very lucky - they get great food whenever they want it with very little fuss. But what about their families?

Guatemala is one of the poorest countries in Latin America. More than 50% of families live in poverty on less than $2 a day. Ever since the Spanish conquered the indigenous Mayan people, the country has had a turbulent history of dictatorships, violence and unequal opportunities.

While healthy breastfed babies were all around me, so was the influence of American fast food. Small local tiendas (their equivalent of a Super C without the gas pumps) sell Coca Cola, potato chips and cookies in neighborhoods where families have few financial resources. Precious quetzal are spent on food devoid of nutrition, but high in calories. As in America, the incidence of obesity in Guatemala is sky rocketing. Processed American food is working its way into their culture, slowly replacing locally grown produce.

The Unites States is making a concerted effort to introduce real food back into people's lives. May we develop the same consciousness for our friends in Guatemala who are facing a myriad of political and social issues.