Celebrating a Century ... and Holding Up Well 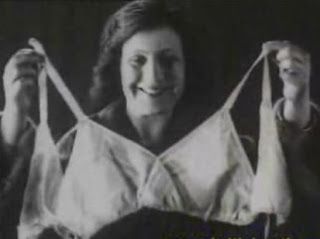 Breasts have been “under cover” for many years. In the 19th century, they were hidden beneath corsets, a torturesome device designed to shape, lift and “punish” a woman’s breasts. An American debutante, Mary Phelps Jacob, is credited with the invention of the modern day bra. In 1914 she enlisted her French maid to help her sew two handkerchiefs together and attach pink ribbons for straps. The design stuck, Mary sold the patent for her “Backless Brassiere” to Warner Brothers Corset Company for $1,500, and bras took on a life of their own.

As a child, the only breasts my friends and I saw were forbidden photos from National Geographic or Playboy magazines. Not until I became a mother did I fully realize that the original purpose of human breasts was to feed a baby. And not until I became a lactation consultant did I realize that breasts come in many different sizes, shapes and colors.

They ooze out of Victoria Secret ads. They have been mammogramed on Good Morning America by a national news anchor. Even the Pope is talking about breasts. In an interview with an Italian newspaper, the pope compared a mother’s need to breastfeed her hungry baby to our responsibility to take care of world hunger.

Breasts and bras are close companions and full of controversy. Bras have been accused of turning breasts into sexual objects. They have set off metal detectors in post 9/11 airport security screeners. And, while they may be touted as keeping breasts firm and perky, medical experts agree that there is no medical reason to wear a bra. It is a matter of choice and no bra will keep a pair of breasts from eventually sagging with age.

More than $16 billion worth of bras are sold around the world every year, although in some middle eastern cultures bras are forbidden as being too Western. The average woman owns nine bras and 80-85% of women wear the wrong size bra. Many women find shopping for a bra wearisome. So much so, that a new online business called True&Co. uses an algorithm to match a woman’s body type (there are over 2,000) to a bra that will fit.

Nursing bras make getting to the breast a bit easier when it comes time to feed a baby. They have also come a long ways. I remember owning a frumpy little white cotton bra – the only one I could find in town with my first baby. Not so today. We sell a lot of cute, comfortable nursing bras at MilkWorks. One of our deep dark secrets is that we sell nursing bras to women who have not nursed a baby in years (myself included!). All of our front desk staff are certified bra fitters - it is a rare mom that leaves MilkWorks without a smile on her face - and a comfortable bra or camisole covering, supporting, enhancing and decorating her breasts!