A New Take on Changing Diapers….. 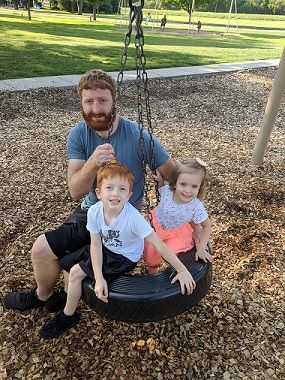 Mother’s Day was first conceived in 1908 as a way to honor the sacrifice that mothers make for their children. President Woodrow Wilson made the day official in 1914 when he signed a measure establishing the 2nd Sunday in May as Mother’s Day. Today, more phone calls are made on the 2nd Sunday in May than any other day of the year, and phone traffic spikes by as much as 37%. Everyone wants to talk to their mom.

There were numerous attempts to launch a similar day for dads, but with little success. Not until 1972, in the midst of the women’s movement, did President Richard Nixon make Father’s Day official. What took so long?

As women’s lives have changed, so has the role of fathers.

Everywhere there is a baby, there is also a dad, in some way, manner or form. While moms and dads face similar, yet different, issues based on their gender and the choices a family makes to take care of their children, we still struggle to acknowledge the incredibly important role that dads play in raising healthy children.

We talk about maternal health, but we really don’t talk about paternal health. Yet we all know that parenthood is more than pregnancy, birth and breastfeeding. We used to “allow” men to change a diaper or be in the birthing room. Now we expect them to carry their weight as a father, especially if mom is bringing home the bacon. We seldom acknowledge the needs of dads as they navigate the world of fatherhood.
It used to be rare for a dad to attend a breastfeeding class at MilkWorks. Now, it’s unusual for a mom to come alone. Dads are entering territory that was foreign to their own fathers. Just as it is hard for women to learn how to breastfeed when they have few role models, it is difficult for men to learn how to father when they are treading new ground. We expect dads in the 21st century to be confident - when their role models were anything but.

How do we help dads find their way in a changing world, and grow into parenthood? Just as moms do: by learning the very most basic tasks. This means skin to skin contact, changing diapers, swaddling and rocking, using a baby carrier, cleaning pump parts, and folding baby clothes.

One of the best lessons for a new mom is allowing dad to be a dad. Moms and dads often play differently with their kids. This is good for kids as it opens up their world to more possibilities. There is no one way for a dad to be a father. Throughout history and across cultures, the experience of fathers varies tremendously. There is little research on the role of fathers prior to the 1950’s. Since then, there has been an explosion of research, and the broad consensus is that fathers are important contributors to the development of their children.

Let’s start thinking more about paternal health. What are the unique learning needs of men as they enter parenthood? How do we provide them opportunities to gain confidence? What do we know about postpartum adjustment for fathers? If masculinity involves independence, adventure and status, how do fathers merge these concepts with a crying baby who just wants to be cuddled?

Happy Father’s Day, all you dads out there! Thank you for the vital role you play in your kid’s lives. We’re rooting for you!