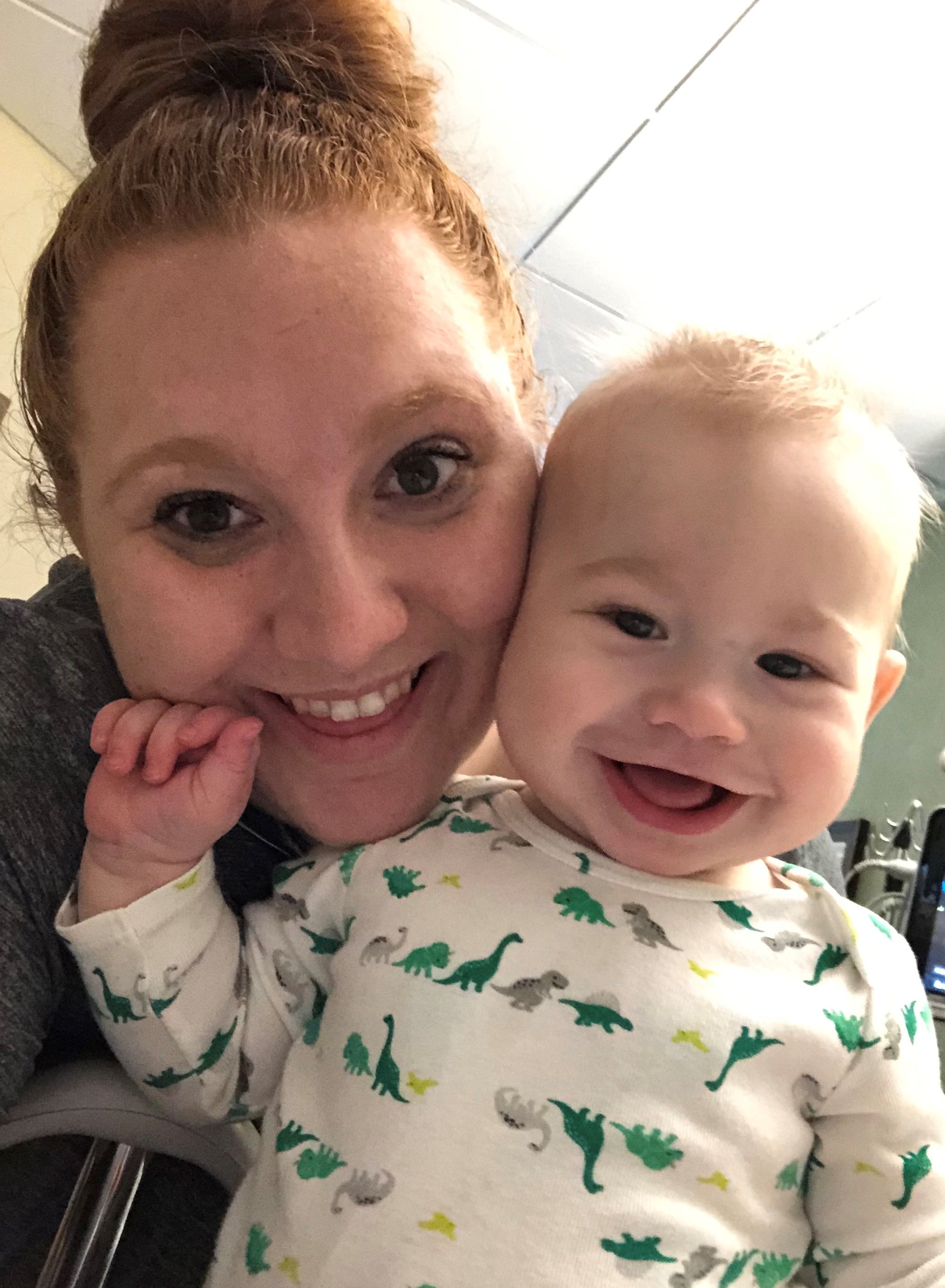 July 25, 2018. The day I found out I was pregnant, and the day I started planning what being a mom was going to look like for me and what parenting would look like for me and my husband. We planned the nursery, the clothes, researched car seats and swings, and found the perfect stroller. My husband and I took the birthing class and the breastfeeding class, preparing for every detail we could. As an only child who is also adopted, I didn’t know much about these things, but I knew breastfeeding was important to me and I craved that bond with my baby.

Our beautiful baby boy Oliver made his debut April 2nd and my breastfeeding journey started out like most…painful, lots of trial and error, exhausting, and frustrating. But I really felt that bond with my baby and I felt complete. I started going to MilkWorks a few days after we left the hospital to help me with Oliver’s latch. He used a nipple shield to nurse from day one and sometimes he had trouble staying attached.  Through our whole journey he never weaned from it either...he loved that shield! I never set goals for nursing as to how long I wanted to go. You hear the recommended amount of time is one year, but I was more of a short term goal setter. We made it 6 weeks nursing, and after that small victory I told myself yes, we can go another 6 weeks. Of course nothing in this journey has been easy, so naturally we hit a road block. Oliver started getting really fussy around 2 months old. Never fully satisfied, was latching on and off, and laying flat in his crib was a nightmare. We made an appointment with the pediatrician, and I was feeling defeated. Formula was brought up. Maybe Oliver was developing an intolerance to something I was eating, or maybe he just had an upset tummy so this sensitive formula would help. I bawled. It isn’t want I wanted, it wasn’t part of the plan. I felt like a failure and like I was hurting my baby. My husband was really supportive, telling the pediatrician it wasn’t our plan and that we needed to try other options before we resorted to formula. The first attempt to help our baby was to cut everything out of my diet that could be causing the issues, but not only was Oliver not improving, I was now unhappy and bitter. I added back in the milk and the cheese slowly, and Oliver remained the same, so back to the pediatrician we went. Next step was reflux medication and within 2 days he was acting so much better. Nursing was back to normal and this mama was feeling so much more relieved.

Throughout this time, I was still seeing my wonderful Lactation Consultant. She worked with me and Oliver to make sure he was getting everything he needed and to check in with my feelings as to our progress. He was gaining the weight he needed to be and was getting better at nursing every week. When I started to get stressed about returning to work, we made sure I had a plan for pumping and saving milk.

I returned to work at the end of June, and I noticed things got difficult almost immediately. I never had an over supply to begin with, I was what they call a  “just enougher”. I took offense to that and tried to break that pattern, but I really truly could only make “just enough” milk to meet Oliver’s needs every day and not a drop more. Things were happening outside of my control. I was on call a lot, I worked by myself in the evenings and didn’t always get every pump session in that I needed to, and to put it lightly…I was stressed and my supply showed it. I had the whole morning with Oliver to nurse before I had to drop him off at daycare, but at work I was struggling to pump the 12-14 oz he needed to have while away from me until i got home at night.

So back to MilkWorks we went. I started going to mom talk on Tuesday mornings at the invitation of a friend when Oliver was about 3.5 months old. I was defeated, mentally and physically exhausted, and I found moms in there that were going through the same things I was…I wasn’t alone. We talked about our breastfeeding journeys, but what I loved more and what I fed off of was the community. We celebrated little wins for the week and we listened and lifted up moms that had really difficult weeks as well. I talked about my breastfeeding journey and how it was slowing shifting into something I didn’t plan for, and everyone reassured me with those words that, now, I truly take to heart, “fed is best”.

I had appointments every week at MilkWorks or every other week trying to up my supply. We tried the medications, the shakes, the food, brewers yeast, chia seeds, power pumping, literally every option, and nothing. I was comparing myself to those moms out there that can over produce, I was judging my body and my journey saying I wasn’t good enough for my son. I broke down to my best friend, who is in fact one of those amazing moms that can have a huge freezer stash (like 400 ounces) and exclusively breastfeed her now 2 year old. I set aside all my mom pride, and asked for advice. She suggested buying donor milk so I could build my stash back up and just focus on pumping. Her guidance gave me the peace of mind that my child would have milk instead of worrying I wasn’t going to make enough. I put off formula for another month thanks to donor milk and I will forever be grateful. By the end of the next week, I had a constant supply of 28 oz of milk in the refrigerator. Yes, I remember that number because I became obsessed with it. I had seven 4 oz bottles in the refrigerator at all times. I took two to daycare and two were for the evenings before I got home from work. The other three were backups just in case he was hungrier than usual or if I came home late from work. I was power pumping every night when I got home and trying to pump after most feedings.

September 2nd, Oliver hit 5 months old, and finally I had to give in. I was stressed, not sleeping well (partially because Oliver hadn’t figured out how great sleep is), obsessed with the pump, the ounces coming out were smaller and smaller which made me cry, and I had driven myself crazy. I opened the container of formula that taunted me from the counter ever since that dreadful pediatrician appointment, and gave Oliver his first formula bottle. HE DIDN’T EVEN CARE. Let me reiterate that. He didn’t notice the difference, he didn’t care, he wasn’t phased. He chugged the bottle and went about his business. Huh. I drove him to daycare that day, with formula in in his bag instead of breast milk. Guess what? He survived. He still loved me, he still wanted me when I was at home, and he still wanted to nurse, but he was perfectly content having bottles of formula too. The stress and pressure of making enough milk instantly was gone.

I no longer had to stress that tomorrow Oliver wouldn’t have enough milk at daycare, because he had formula as a backup in case there wasn’t extra milk left over. I didn’t have to feel like I was constantly attached to my pump because there would be food no matter what for my child. Formula isn’t bad for my baby. Formula is food which helps him grow strong and keeps him healthy. Hear me when I say this, because it took me a while to fully believe this: giving your baby formula doesn’t make you a bad mom. You can nurse and give formula and your baby will still love you. It isn’t an all or nothing and having both in my life made me a better mom! I recharged myself, I was less stressed about pumping and I could focus on my family and being present.  I still nursed Oliver to sleep and when he needed comfort. I nursed him when he woke up in the mornings and while we were out in public. He nursed like crazy during mom talk on Tuesday mornings. Oliver got formula at daycare, which turned out to be easier, and breast milk while he was home with my husband in the evenings from what I had pumped the day before. I didn’t have a freezer stash, but that didn’t consume me anymore. Plans changed and I had learned to roll with it.

So I still continue to go to mom talk on Tuesday mornings at MilkWorks. It is my safe place to celebrate my baby and my mom wins for the week, and it is a safe space for me to feed Oliver a formula bottle without feeling any judgment. Oliver self weaned himself from nursing right at 8 months old, at the beginning of December after I had a long on-call weekend. I wasn’t ready for the journey to be over, and it took me by surprise. I cried as I took my last breastfeeding selfie with him curled up on my lap. He nursed himself to sleep that night. He didn't nurse again, after that. Our breastfeeding journey might be over, but that is okay. I made it 8 beautiful months breastfeeding Oliver, exclusively or not that doesn’t matter, and I am SO extremely proud of our journey.

* We want to hear from YOU. Tell us about your feeding or parenting journey! We'd love to help you tell your story in our monthly newsletter. Send your name, contact information and a brief summary to newsletter@milkworks.org to learn more!