Some Tears are Worth Shedding 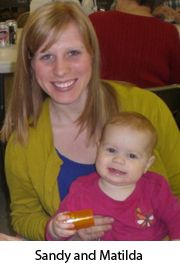 Last March, I took my 12-week old daughter to day care for the first time. I nursed her exclusively, but my mom and husband had luck feeding her breastmilk from a bottle. I pumped my milk and was able to collect 20 whole ounces to take to daycare that first day. I felt great that I was able to collect enough milk for her for the day, and maybe even the next day. It was a Wednesday, I decided to go back during the middle of the week to make it easier on me. It was icy and cold. I set the milk in the cooler on the trunk of the car, while I sat in the backseat and got our daughter Matilda out of the car seat. While I was in the car, the cooler slipped and fell to the ground. I picked it up, and to my horror one 10-ounce container of breastmilk had broken open and spilled all over. Half of my milk supply that I had so diligently pumped was wasted. I started to cry.

I managed to get Matilda and all of her stuff into the daycare and then get myself to be able to leave her behind. Then I got into the car and cried some more. I got to work and cried all day long. I called daycare, and realized that it was my daughter’s cries that I heard in the background. She hadn’t eaten all day. I called my mother, she works in the same town as the daycare. Since she had success giving her a bottle, she stopped by to try to see if she were able to get her to drink some. She had an ounce or two. I had my husband stop by to do the same. Still no luck. I left work and tried to drive the speed limit the 12 miles to get to her as fast as I could. I picked her up and she was so red in the face from crying all day. We both were. I carried her to the nursing room and she ate. Now a year later, that story is almost therapeutic to me.

At six months, I left my husband and Matilda to go on an 18-day vacation in Europe with my siblings. I nursed and pumped and stored. I was able to collect over 500 ounces extra than Matilda was consuming before I left. When I returned home, she even had a couple ounces left. I took my pump with me on vacation and was able to pump on the train, on the plane and even in line to eat at a restaurant – thanks to my Medela Freestyle pump and Udder cover. There were tears cried there, too – worry that she was going to run out of milk, having to pump and dump all that milk since it was not practical to store it properly or mail it back. But in spite of that, I was able to return home and after two weeks of what seemed like constant nighttime feeding, my supply returned and I was able to feed her solely on breastmilk for the next six months – a full year!

A couple weeks ago, during the week between Christmas and New Year, I made a call to MilkWorks. I was desperate. I needed a solution. My almost 13-month-old daughter would not take the bottle from me. She never really has, but this time was different. We were used to just nursing at night, and my supply was down. Matilda had different plans. She thought she would be able to nurse whenever she wanted because I was there 24/7 with her. I was dry. I was sore, and she was getting cranky because of low milk supply. But she would not take a bottle or sippy and she wasn’t eating her regular amount of baby food. She just wanted to nurse. The ladies at MilkWorks helped me realize that this is a special time, and I need to let her know that now is not about nourishment as much as it is about our new “nursing relationship.” So Matilda and I had a little discussion about it, and when nursing is going to be okay, and when it isn’t (you would be surprised at how much a 13-month-old seems to pick up on - I was). And she then decided she would take the bottle and has just been nursing at night ever since.

Thank you MilkWorks for your support through the last year. I came to your nursing class while I was pregnant. I read your returning to work and nursing book since I was unable to attend class. I came and you helped me get the right nursing bra, the right pump shield and you helped me emotionally with the cycle of nursing.

There have been many tears shed over breastmilk in the last year. But all tears worth shedding.