A Breastfeeding Journey of Enormous Strength 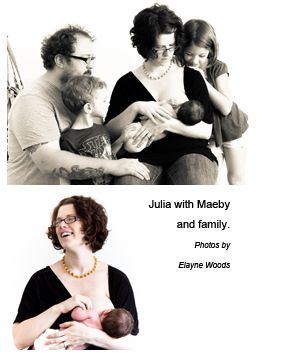 Breastfeeding has been a journey of discovery for me and my three children. Before I became a mother, I did not really have an opinion one way or the other about breastfeeding. When my first child was born, I breastfed her because I was told it was best for my baby. I felt uneducated and unsupported and struggled with postpartum depression. My baby had trouble latching because I have flat nipples and I had to return to work outside the home. At three months I weaned my daughter to formula and did not think it was a big deal to stop.

When my son was born, I felt better about myself as a mother, and I felt supported to breastfeed. I was very confident and was surprised when my newborn son had difficulties that were different from my daughter’s. He was a slow gainer, not too interested in feeding, and was intolerant to some foods I was eating. I sought help from the lactation consultants at MilkWorks and we worked through his issues. Levi and I eventually got the hang of it and he went on to nurse beautifully until his second birthday!

My interest in breastfeeding and childbirth increased, and I started reading and learning as much as I could. By the time I was pregnant with my third child, I was very confident. I thought I would have no problems at all! Yeah right! Just when you think you have it all figured out! My third child was born at The Midwife’s Place, a birthing center in Bellevue. It was an amazing birth (one I will never forget)! Maeby was a healthy 8 lbs. 1 oz. and I was excited to put her to breast. But her mouth was so small, and my once flat nipples had now become quite large. In addition, she curled her top lip under, which made it hard for her to latch. By the time she was twelve hours old, I knew she was going to have some problems. I was determined to avoid “artificial” helpers like a nipple shield or bottles to help her feed. I wanted to breastfeed the way I was designed to do it. I tried and tried, but Maeby could not remove milk.

Over the next several weeks, I worked with the lactation consultants at MilkWorks and tried everything to help Maeby feed better. I used a nipple shield, fed her pumped milk after breastfeeding, and eliminated some foods from my diet. She started to refuse the breast because she could not get milk from me, even though I had a great supply. My vigorous let down seemed to make it harder for her! Because she had a hard time turning her upper lip out and had what is called a “lip tie”, a piece of skin attaching her lip to her gum, I even found a dentist who was willing to use a laser to loosen the tie.

Finally, one day, when Maeby was around 15 weeks old, I put her to breast, she latched and she removed milk. It was a glorious day! I came in to MilkWorks to weigh Maeby several more times, and, within a week, she was fully breastfeeding. I was so proud of her and so thankful for all of the support I had received. My husband helped wrangle my other two kiddos so I could pump and breastfeed. My employer and co-workers at CircleME were supportive of my pumping and feeding needs. I could not have done it without the amazing help and encouragement of so many people!

As I think about other moms who might face similar challenges breastfeeding, I want to tell them to take a deep breath, relax and don’t panic if breastfeeding is not perfect . Breastfeeding is not always as we picture it, but that doesn’t mean it can’t work. Our babies need our support as they learn how to do this. I found it helpful to keep my sense of humor, even when I wanted to cry and throw in the towel, and I really depended upon others who understood that breastfeeding was important for me and my baby. Every time I see Maeby when she comes off my breast and looks up and smiles at me, my memories of all that hard work just disappear.

I realize how important it is that my older children see me breastfeed their younger sister. Maeby and I are a living biology lesson! I want to be able to talk to my children about breastfeeding. If we stop hiding how we feed our babies, more children will see breastfeeding as a normal part of life. Our culture needs to show breastfeeding on TV and in movies, not just as something a mother does right after birth or as the punch line to a joke. Breastfeeding needs to be part of every day, whether moms are out shopping, at work, or playing at the park with their kids.

Breastfeeding is so many things to me: a bond with my child, nutrition for my baby, and my connection with other mothers. It is healthy for me and my babies, and it is a daily reminder of God and how he has made me.