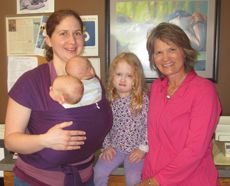 Shortly after learning that I was expecting twins, I shared the news with Ann, my lactation consultant at Milkworks. She had helped so much with my firstborn, Jocelyn, and I wanted her support and wisdom to help me succeed in nursing my twins. I knew twins could have extra challenges with nursing but frankly I was not intimidated because I had so many problems nursing Jocelyn and still persevered so that we could have the health and relationship benefits of nursing.

My sons were born prematurely at 35 weeks gestation. Since Josiah and Noah were premature they were taken immediately to NICU where I nursed them within 1.5 hours after birth. During our 2 week stay in the NICU, I nursed and pumped and also supplemented with a little banked human milk fed via bottle.

The day after our discharge from NICU I met Ann at MilkWorks. My babies were very sleepy and poor at milk removal. Ann recommended nursing just a couple of times a day and focusing on frequent pumping. I increased pumping from 10 to 16 times a day.

When Josiah and Noah were 1 month old I began renting a scale from MilkWorks. They were very inconsistent with milk removal, removing nothing to 1 ounce a session. However, over the weeks they progressed, which encouraged me since I never saw good progress with my daughter. At 7 weeks I became more behind with milk production and had to supplement with donor milk fed via bottle. I had, by this time, begun nursing more frequently and decreasing pumping back to 10 times a day. Suzy, another wonderful IBCLC at MilkWorks introduced me to a lactation aid - a long, thin tube that I position in my babies’ mouths that leads from a little container holding milk - so that I could satisfy my babies at breast. I loved my babies feeling content at breast so I was highly motivated to make the lactation aid work.

When my sons were 10 weeks old, it was taking me 30 minutes to pump 1 oz and I was only nursing 5 times a day so I could pump at least 9 times. My husband bottle fed them at night while I pumped. I contacted Dr Jack Newman, a leading researcher in the field of breastfeeding, and he advised me to stop using bottles entirely. I told him I could nurse more often if I weren’t pumping and he agreed that pumping was no longer productive for me.

J_NAnn agreed that I should stop pumping and I kept weighing my babies so I could monitor their intake and my supply closely. My supply stayed consistent and I supplemented at breast with the tube for 5 feedings a day when my supply was lowest, otherwise I just nursed them at the other sessions.

At 14 weeks we returned the scale and although it has been difficult not having the feedback from a scale, I’m learning to trust my babies’ cues. Now just past 3 months old I am not pumping but am nursing my babies about 10 times a day. They haven’t gotten any bottles since 10 weeks old and I absolutely love the lactation aid. I highly recommend moms whose babies latch on but can’t get enough at breast to use a lactation aid. Even though it still takes most of my day and night to feed my babies, I am thankful to not have to pump any more and to hold my babies more. I’ve tried tandem nursing but it’s not efficient right now and I enjoy the one on one time with both Josiah and Noah.

Breastfeeding twins is not the easiest thing I’ve ever done but I am thankful for the support of MilkWorks, especially Ann and Suzy; and my family and friends. I still supplement with 8-10 oz/day of donor milk for both babies combined. I have tried everything to get my supply up but I still have to supplement. I take a a galactagogue, an herbal mixture that may increase supply, as well as eating a diet high in foods traditionally associated with making more milk (oatmeal, brewer’s yeast, flax seed, brown rice and green leafy vegetables) and nurse my babies frequently. I think part of my problem is exhaustion but I don’t know how a mom of multiples is supposed to get adequate sleep. I am trying to be at peace with the fact I can’t provide all the milk my babies need and am very grateful for the moms who have been so generous so that my babies can have a 100% human milk diet.