Stronger the Second Time Around 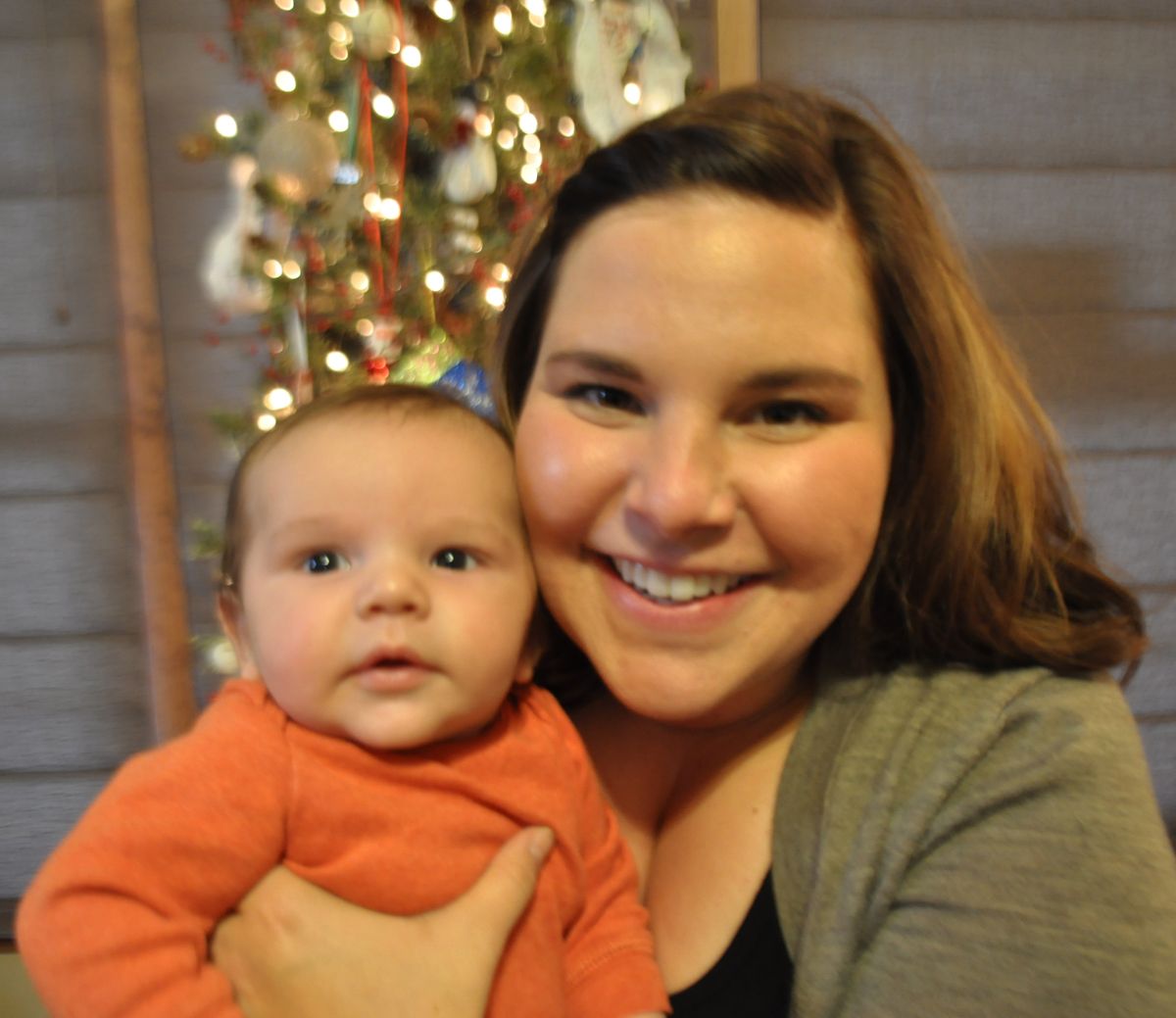 “Have you tried Fenugreek?” “Is he latching okay?” “What about steel cut oats, or the tea?” I have tried it all! Anything you could ever think of to make more milk…I’ve tried it. This is my breastfeeding journey…

I had low supply with my first son, Porter, and it absolutely broke my heart. I don’t think I knew enough about breastfeeding at the time to seek out more help or to speak up and say what wasn’t working for me. When Porter was born, I planned to come to MilkWorks right away, but I didn’t. In the hospital I wasn’t able to self-express any milk while we were there but no one thought this was an issue.

My son starved for the first 72 hours of his life until my husband and I gave in and fed him a bottle of formula, which he gulped down and finally slept. We both felt terrible. Porter was getting dehydrated and more and more jaundiced as time went on. We ended up in the pediatrician’s office the day after we left the hospital. We were seen by lactation help there, but I didn’t get the calm and nurturing environment that my “stressed out new mom self” needed at the time. I was scheduled for an appointment in one week even though I felt I needed to be seen and supported more frequently.

I didn’t feel confident latching Porter, although everyone told me how great he was at latching. I was triple feeding (breast, bottle, pump, repeat) and it was completely awful! Needless to say it was a terrible experience. By the time I made an appointment with Dr. Leeper because I thought something was wrong with both my son and myself, it was too late. I had given up. I was disappointed in myself for not seeking out the help I wanted and needed sooner, and extremely sad that I couldn’t feed my own child more than a few cc’s of my milk.

Even before my second son, Paxton, was born, I vowed things would be different. I told myself I would be willing to exclusively pump if I needed to, as long as I could give him my milk. If he had severe MSPI I would suck it up and deal with the crazy diet to give him my milk. No matter what the challenge, as long as I had milk it would be okay and I would do whatever it took. I decided to overly educate myself throughout my pregnancy. I bought books, I did online research, I went in and talked with the IBCLCs and breastfeeding educators at MilkWorks. I researched current leaders in the field to see what they had to say about low supply and what to do. I knew the most important thing was for my baby to remove milk and do it frequently and efficiently.

During this pregnancy I had more breast changes. I could actually self-express colostrum and did so before delivery. I took what I had expressed to the hospital. After Paxton was born, he latched right away in the delivery room. I held him skin to skin for quite a while before I let them take his measurements and weight. After that, he was back on me, skin to skin. I don’t think my husband held him for several hours after delivery because I wanted him on me to help with the whole process and because he was just so darn cute!

Once I was in my postpartum room, I had some wonderful nurses that were great helping me to latch and find comfortable positions to nurse in. After I delivered I made an appointment with Suzy at MilkWorks for the day we discharged from the hospital. MilkWorks was our first outing. My husband took part in the experience as well. He knew howimportant breastfeeding was to me and has been very supportive. I knew that it would be difficult but I was more confident that I would be able to achieve what I wanted to this time, which was feeding my baby my own milk, and hopefully not having to supplement with formula, or not for long if I had to.

At our first appointment, Paxton didn’t take a large enough amount to even register on the scale. Suzy recommended we supplement with finger feeding. She offered donor milk that we could use until my milk came in. We decided to purchase it. I didn’t give him enough through that night and when we saw the pediatrician the next day his bilirubin levels had gone up and he needed phototherapy at home. We supplemented more with donor milk until that got too expensive and then we switched to formula.

Our first few appointments with Suzy were encouraging. Paxton was a vigorous feeder at the breast, but he got such small amounts it wasn’t even registering on the scale despite hearing him swallow. When he finally took enough to register it was 2cc’s. The next appointment it went up to 4cc’s, then 8cc’s. It crept up slowly over the times we saw Suzy, and she was always encouraging, telling me stories of mothers who eventually achieved their goals.

I had been using the Supplemental Nursing System (SNS) since our second appointment religiously. Paxton had not had a bottle yet, which I was so proud of, but I was getting worn out and discouraged. I was extremely stressed out, which was also terrible for my milk supply. I would pump after feeding him and barely pump 2cc’s. I would hand express and get a little more. I was able to get my hands on the medication I thought would fix it all. It didn’t. Eventually I was able to increase my supply to anywhere from 1-2 ounces that I would be able to pump or Paxton was able to remove the milk from my breast.

I went into my appointments with Suzy several times discouraged and tearful, but whenever I would leave I felt confident I could make it “one more day.” I had to tell myself this over and over to get through each day. Suzy had a way of making me feel nurtured, mothered, and confident in myself as a mother. She hugged me when I needed a hug and she was realistic when I needed it. She provided me with a wealth of knowledge, more so than any of the websites I had visited or books I had read. She invited me to their Wednesday group consult sessions. I was hesitant to go and feed Paxton with the SNS in front of other women, like I was failing by giving him formula. I made sure to stockpile my expressed breast milk so I could take that instead. I mean you can’t be in MilkWorks and make formula to feed your child, right? Well that was my mindset the first time I went to the group. As I went more and more, I was able to share my story and learn more about the other mothers. I wasn’t the only one having to supplement with formula, or use the SNS, or have my baby prefer the bottle to the breast. It was nice to know and remember that other moms weren’t sleeping either and that babies just cry sometimes and it’s not always something you’re doing wrong. The group made me feel normal again.

Our breastfeeding journey has led us to frustration, tears, anger, constipation, fussiness, vasospasms and nursing strikes with a preference for the bottle. I have been exhausted emotionally, mentally and physically on a daily basis. If you ask me,breastfeeding was, and is, the hardest thing I have ever done, but the best thing I have ever done. I had to let some of the stress and responsibility of it go. If I kept holding onto it I would have been committed to the psych ward, seriously!

The one thing that has kept me going was that my sweet little baby boy loves his momma’s milk, no matter what the amount, regardless if it’s from a bottle or from my breast. Suzy helped me to understand that I didn’t have to be the mom that exclusively breast feeds or the mom that only formula feeds. There are so many in between ways of feeding your baby, and you have to do what works best for you. I cannot physically exclusively breastfeed my son. It is just not possible.

As of now, there is no reason for my low supply. I have normal prolactin levels, adequate and frequent removal of milk at the breast and with a pump, normal breasts and anatomy, and a normal thyroid. I tried taking medication, herbs, drinking tons of water, eating green leafy veggies, oatmeal, and brown rice. I tried acupuncture and meditation. I encapsulated my placenta and took that initially, but it didn’t seem to help at all, but only hinder things. I have tried it ALL!

At this point, 13 weeks since Paxton was born, I have decided to feed my son at the breast whatever I can and then bottle feed with expressed breast milk and formula as I need to. I have continued pumping since I have gone back to work. My supply has dropped some, but I continue to give Paxton all I can. The one thing I know for sure is that my son and I have the most special bond. He knows me like no one else. He finds me the second I walk in the room or the moment he hears my voice or smells me near. He will be a healthy and happy boy no matter what he is fed. The best thing I have done for him so far is love him enough to give him the milk I can.