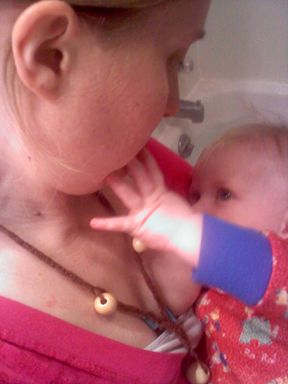 In June 2011, I became a mother to a beautiful eight-pound boy. Breastfeeding was an incredibly challenging learning curve for my son and me. For the first month we struggled with his inability to latch properly. I had massive pain and wounds on my nipples. After a month and a half of struggling, we finally went to meet with Suzy at MilkWorks. After doing our first weigh-feed-weigh, we discovered that my son was removing less than a half ounce and I was only able to pump a half ounce or less in 30 minutes. My son was still below his birth weight when I first went to MilkWorks.

Suzy suggested that we triple feed. I have been described as a person who “goes hard or goes home.” Living true to that, I went home and set an alarm to pump/latch every two hours around the clock. We did not stray from this routine for the next three and a half months. Slowly, but steadily, my son’s latch and my milk supply improved.

In October 2011, I remember calling Suzy to tell her that my son had received his entire daily feedings from my breast alone! In addition, I was pumping nine extra ounces after each feeding. I continued pumping for many months and I was able to become a breast milk donor!

In September 2013, my second son was born. We went to MilkWorks, 27 hours after our son was born. I wanted to ensure that we got the best start we possibly could. To be safe, I chose to pump after each feeding for the first month. This revved up my supply and I was able to donate breast milk again.
Today I continue to breastfeed my 16-month-old son. I am so happy that I went to MilkWorks in 2011. I wonder if I would still be nursing today? From pumping half an ounce in July 2011 to earlier this year, January 25, 2015, when I am donating my 1000th ounce of breast milk. God sure is good!