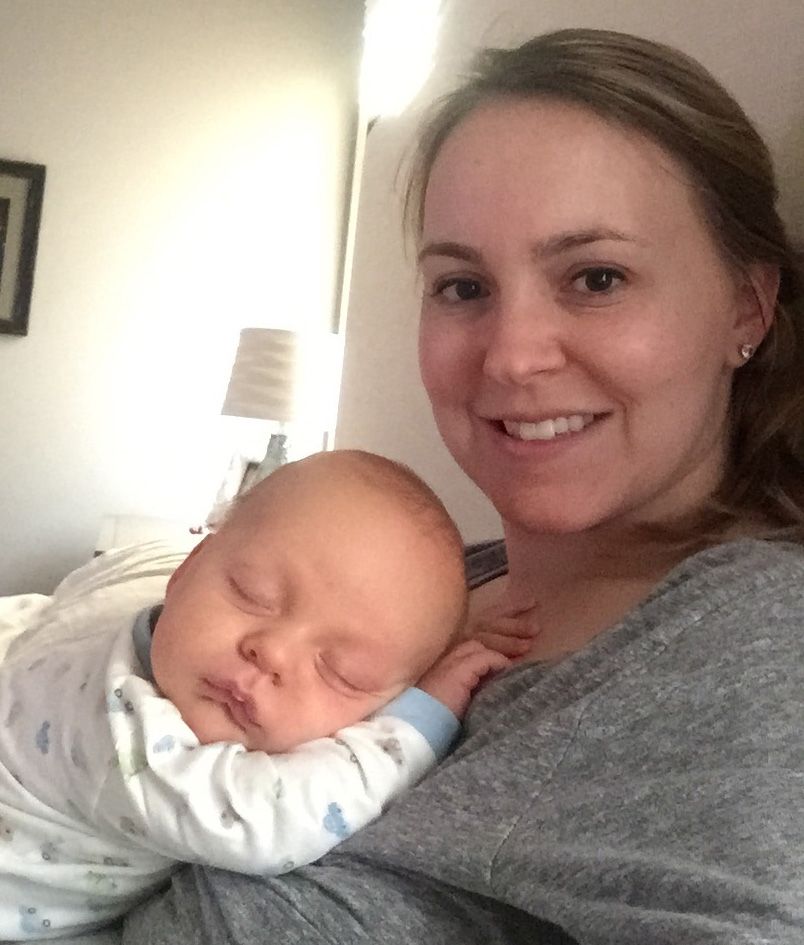 My first breastfeeding experience with my three-year-old daughter was difficult. When she was born I didn't have any friends or family who had recently breastfed. If I had questions, I didn't really have anyone to turn to. I exclusively breastfed my daughter for six weeks. When she was six weeks old, I started pumping during the day and nursing her only at night time. I was overwhelmed and tired and she was a very slow nurser. It was much faster to pump and feed her a bottle during the day.

At the time I didn't know as much about the benefits of breastfeeding as I do now. I thought that bottle feeding breastmilk was equivalent to feeding from the breast. Around four to five months of age, my daughter started to refuse the breast. It was so much easier for her to drink from a bottle. I ended up pumping exclusively until she was a year old. I tried several times unsuccessfully to get her back to the breast. When I got pregnant with my son, I was determined to breastfeed and not pump.

My breastfeeding journey with my son began very well. The first day in the hospital, I thought things were going great. He was latching and it seemed like he was getting milk. Fast forward 24 hours and my nipples were cracked and scabbed and I was in a LOT of pain. Unfortunately there wasn't a lactation consultant in the hospital over the weekend, but the nurses helped me with his latch.

We brought our son home on Sunday, and by the time we had his pediatrician visit on Monday, he had already lost 10% of his body weight. The pediatrician suggested we start supplementing one ounce after every feed. I chose to supplement with breastmilk because I had a friend that I trusted and I really wanted to avoid formula if I could. She was gracious enough to give us some of her breastmilk to get by until my milk came in.

My milk finally came in on Tuesday and I was so relieved. I thought our problems would disappear now. At this point I thought that the pain in my nipples was because my son was still learning how to latch. However, it became apparent by Thursday that something else was wrong. I was frustrated and tired and my son was eating every hour or more. He was pretty much attached to me 24/7. I was in excruciating pain every time my son ate and I was starting to lose hope that I could breastfeed.

I called MilkWorks O and I was very relieved when they agreed to see me that afternoon. I had my first consultation and I discovered that my son only got about half an ounce of milk between both sides, which wasn't adequate. I was able to pump more milk out after he ate, so my lactation consultant suggested that I triple feed. This means offer the breast, follow with some pumped milk and then pump to have milk for the next feeding.

After my first appointment at MilkWorks O, when I discovered my son was not transferring milk properly, coupled with the extreme pain and trauma to my nipples, I was very disheartened and called my sister to vent. Her daughter had a lip and tongue tie as well, and she advised me to get a second opinion from another physician.

I called a pediatrician in Omaha who is also a lactation consultant. She got me in immediately
and suggested clipping his tongue (also known as a frenotomy), which she did at that appointment and said we could clip the lip if necessary. She shared that many times clipping the tongue is all that is needed to help with latching and milk removal, but if his problems persisted that she could address his lip tie as well. Ten days later his latch was still painful so she went ahead and clipped the lip tie also.

During this time period, I continued to meet with my lactation consultant at MilkWorks O. She
helped me with various positions to help him with a deeper latch and also gave us suck training exercises to help him with the correct usage of his tongue. At this point things were better but I really felt there was still room for improvement as my son was still eating about every hour or more. There were many days when I wanted to give up, but I just took it a day at a time and told myself not to quit on a bad day.

Having my son’s lip clipped definitely helped his latch and feeding but I still felt like he could be doing a better job at transferring milk and eating, which was evident by the weighted feeds I had been doing at MilkWorks O. I made the decision to take my son to a chiropractor after learning from an MD who contributes to a tongue tie support group on Facebook that “bodywork” after a frenotomy can be helpful. The chiropractor that I had seen while I was pregnant also treats babies, so I was very comfortable taking my son to her. I feel as though these adjustments helped my son to relax during feedings.

I also made an appointment with a physical therapist at UNMC for craniosacral therapy. He examined my son and felt that my son’s nervous system was tight. He worked on stretches for my son’s arms, legs and spine. Before his chiropractic and physical therapy appointments, my son was fussy and wouldn't let me set him down. After several weeks of therapy my son was much more relaxed and was eating better on a regular basis. His irritability also seemed to decrease.

Helping my son learn to breastfeed better was not quick and easy. Some days it felt like things were going backwards, but overall, breastfeeding continued to get better. After two months of working with my lactation consultant, the pediatrician who revised my baby’s tongue and lip ties, my chiropractor and the physical therapist, my son is finally eating more efficiently and is satisfied after his feeds.

My sister was my cheerleader throughout everything I did to help my son breastfeed better. Knowing that she went through some of the same things with her baby gave me the confidence and drive to push through the tough times. I wanted to quit many, many times, but then I thought about my regrets with my daughter.

It helped that my milk supply was good and my son was gaining weight well. This boosted my confidence. I think if he had been having all of his problems along with slow weight gain I would have been more likely to throw in the towel. Breastfeeding my son is so important to me because I know it is healthier than the alternatives. I also wanted to bond with him, and I didn't want to have any regrets with him. I am very grateful that I pushed past all of his problems and I know I would have felt like I failed if I didn't.

I no longer have to pump which is a huge relief and my son goes about two to three hours between feeds, as opposed to eating every hour or more. If I had not sought help from everyone who helped me, I truly believe that I would have either quit breastfeeding by now or would have been exclusively pumping, something that I really wanted to avoid. I am so grateful for all of the help and encouragement I received. My son is now 2 months old and things are going great.