An Incredible Story of Strength 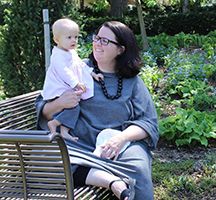 Amanda recently posted a thank you to MilkWorks and shared the unique role that breastfeeding has played in her daughter’s life. Sabrina was diagnosed with genetic form of leukemia and is now part of a research study involving the role of breast milk in helping to treat and support children who are going through leukemia treatment.

In late October, Amanda agreed to take time from her very busy life taking care of Sabrina at Cleveland Children’s Hospital to share her story. It’s a strong one, for sure.

When I was expecting, most of my work colleagues were breastfeeding, so a bit of peer pressure came into play. I personally wanted to experience the special bonding that occurs between a parent and child because of breastfeeding.

My daughter, Sabrina, was born at 37 weeks and it took us about five weeks to get her to latch and feed well at the breast. She would latch but not stay latched, and would push away with her little hands when she was upset, even though she was starving and THAT was what was really making her mad. It took much assistance from MilkWorks and our pediatrician to get her breastfeeding. Using a breast shield for about a week was key for us.

When Sabrina was about six months old, she had a large bump on her head that did not go away. We first attributed it to her newfound ability to roll around. It slowly, so slowly got larger. We had it checked out and they said not to worry. They did some basic blood work and attributed her slightly elevated white counts to her recent six month vaccinations. They did not do an in-depth CBC blood panel at that time, which would have told us immediately it was cancer.

It took another month to get her diagnosed and during that time seven more bumps, and then eight and nine, which I FELT when I breastfed her EVERY TIME, came and started growing bigger. The wait for her diagnosis while those bumps grew was excruciating. And it was terrifying once we received her diagnosis after a biopsy in January, 2016.

Sabrina was diagnosed with Acute Monoblastic Leukemia (AML). Initially she was treated at Children’s Hospital and UNMC in Omaha. She had three rounds of chemotherapy and radiation on her scalp to prepare her for a bone marrow transplant at UNMC. Unfortunately, she then relapsed and the transplant was cancelled.

Per our request to explore all options available before proceeding to treat her relapse, our awesome oncologist at Children's in Omaha, Minnie Abromowitch, found a clinical trial for a medication that is easier on the heart at Cincinnati Children’s Hospital and Medical Center. She knew that Cincinnati Children's experience treating children in relapse was not only second to none, but the style of care there would be an excellent fit for our personalities. They are a phase one institution and have access to the newest drugs and treatments available. They also just opened a cutting-edge proton beam radiation center in September.

Sabrina was accepted into the clinical trial and initially the new drug seemed to do the trick, but then Sabrina relapsed again and developed a second form of leukemia, Acute Lymphoblastic Leukemia (ALL). Cincinnati Children’s is known for their world class genetic analysis and we learned that Sabrina has a genetic swap between the long end of chromosome 11 and the short end of chromosome 1 which CAN make one open to leukemia. They also found that Sabrina’s AML has a genetic profile that will allow her to be treated with an additional chemotherapy agent, so we now have an additional drug in our back pocket if her bone marrow transplant fails to get rid of the leukemias.

Sabrina is now in the middle of the bone marrow transplant process and I have been breastfeeding with great support from her medical team. This has made a huge difference in her health and healing. Through her first 5 rounds of chemo and radiation, she never got mouth sores. We are actually in a milk study here. They have found that 80% of mothers secrete a special SUGAR in their breast milk that helps coat and protect the lining of the whole GI tract. They have used donor breast milk in this study with older children and it has shown to be a very positive addition to chemotherapy regimens. It especially helps children recover faster from the diarrhea associated with treatment.

Pumping, and knowing when to, and when not to, while Sabrina is undergoing treatments has been a real challenge. Recently Sabrina was on TPN and lipids for two weeks because she got mucositis from her intense radiation and chemo. She finally nursed two nights ago twice and has been eating baby food for three days in small amounts. We have been tube feeding her my breast milk for a week and her stools and bottom are looking so good.

As I write this now, we are having a whirlwind week. Sabrina is looking to get discharged early (before day 40 of bone marrow transplant - she is on day 27 today and it looks like discharge on Wednesday) and we have training on maintaining her central line (which we use for lab work and IV infusions at home), NG feedings with a pump, and giving infusions ourselves. We are moving just across the street to Ronald McDonald House here in Cincinnati next week. Very exciting for me to get to sleep in a real bed for the first time in over 100 days. We will be staying there for at least 100 days post bone marrow transplant, which is standard procedure because of her immune compromised status and possibility of graft failure and graft versus host disease.

Sabrina’s medical team has been very supportive of getting her back to breast, but in the meantime, she is getting my pumped milk. Like a typical 16-month-old, when I pump and she is awake, she likes to pull on her IV tubes because she thinks I am ignoring her. I am so appreciative of MilkWorks help in getting us started breastfeeding. Breast milk has been SO important in Sabrina’s care and her life, especially through all of her cancer treatments.