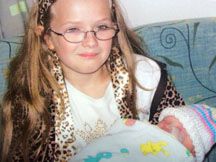 I didn’t have any experience with babies when my daughter was born almost 17 years ago. I was the youngest child in my family. I had never held a baby. I didn’t even play with dolls when I was a little girl. Zero experience! I was somewhat new to a small Kansas town where my husband was a police officer. My only friends were single men from the editorial room of the newspaper where I worked. Family was far away. It also felt like I had zero support.

When it was obvious that I was expecting, a stranger recommended I talk to a lady in town who was the local Le Leche League leader. The leader was actually someone I knew from an article I wrote for the paper. But why would anyone need help breastfeeding? I didn’t call her. Not before my daughter was born. And not after, when I needed someone’s experienced help.

My daughter had some jaundice, and insurance covered a home nurse to check on her every day for a week. When the nurse saw I was struggling with breastfeeding, she continued coming another two weeks to work with us. Finally, she said “this baby just won’t latch, some of them don’t.” I had a hospital grade pump, so I pumped and bottle fed for three months before giving up.

I felt like a failure. I believed the nurse when she said my baby could not feed at the breast. I was too naïve (and embarrassed) to call the Le Leche leader. If the nurse couldn’t help me, who could? This wasn’t the way it was supposed to be.

Fast forward more than nine years, and my husband and I were expecting our second child – now in Lincoln. I anticipated breastfeeding to go badly, but I knew about MilkWorks and that was my Plan A. I had to have a C-section, so I was in the hospital more days this time. I had an attentive lactation consultant who was there every time I needed her. It seemed like I had a natural breastfeeder at first. She latched and ate happily, but a scale showed otherwise. Zero CCs! We worked and worked and worked and by the time we left the hospital, we were doing OK. I had to use the scale every time to verify how much milk she was getting, because there were still times that it seemed like she was latched and eating, but was not.

The first stop out of the hospital was to MilkWorks. It was nearly closing time, but Paula helped us rent a breast pump and a baby scale. And I wanted to make an appointment with a lactation consultant. After talking to the breastfeeding educators about how breastfeeding was going so far, they actually said it sounded like we were doing great, gave some advice, and recommended doing what we were doing for a few days and then calling back for an appointment if I felt like it was needed. I did not need to call back.

MilkWorks was my Plan A, but I did not have a Plan B. I wanted help this time!

Plan B and the help I wanted came from my Kansas baby. Now almost 10, she became my breastfeeding assistant. She helped me adjust breastfeeding pillows, move my nursing stool, do weight checks before and after feedings – she even offered advice. She would read to the baby, often with one of her fingers in the clutches of her little sister’s hand. I could not have done it without her.

Breastfeeding was not a graceful process for months, and I needed the help. By feeding one baby, I bonded with two. Any feelings that I failed breastfeeding my first daughter are gone, because I know she will not question whether or not to breastfeed her babies and I know she has what it takes to get it done.