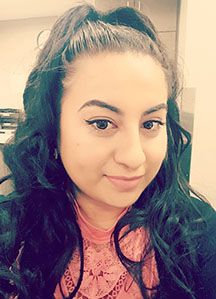 Where were you born and where did you grow up?

I was born in Michoacán, Mexico, but moved to California when I was two years old. My family moved to Nebraska when I was six years old and I have lived in Lincoln since then.

Did the women in your extended family (or community) breastfeed their babies?

I always knew most women in my family breastfed, but it was very private. They always had blankets covering them and they did not really talk about it. I never saw anyone breastfeeding without being covered. It was a very intimate thing.

What encouraged you to breastfeed your own baby?

A home health nurse visited me and talked to me about the benefits of breastfeeding. No one really ever talked to me about formula, and I knew that I wanted to do the healthiest thing possible for my baby even before she was born. As a result, I tried my hardest to make it happen.

Did you have any problems breastfeeding? If so, what did you find helpful?

Breastfeeding was hard in the beginning because I had to have gall bladder surgery the day after my daughter was born. I tried to breastfeed right after birth, but I was concerned that I did not have much colostrum. I understand now why many moms feel discouraged because they don’t think their baby is getting enough.

The next day I had surgery and was out most of the day. Unfortunately, I was taken to surgery again the following day because a few stones were not taken out the day before. This was very stressful because my chart said that I was breastfeeding, but my baby actually did not get to breastfeed when I was in surgery and recovering. My mom tried to explain to the staff that I couldn’t breastfeed because of surgery. My daughter was given formula until I was able to breastfeed after the second surgery.

My nipples were chaffed from the surgery gown rubbing on them. My daughter couldn’t latch and was very frustrated. My nipples were bleeding and I was told to keep trying. A lactation consultant came to see me and gave me some triple nipple cream. I was in a lot of pain so the lactation consultant decided to help me pump before trying again with my baby. Once I was home, I realized that there would be no one to help me heal my skin or tell me how I was supposed to breastfeed.

At my pediatrician’s office, I met another lactation consultant who helped me to try and latch my daughter on. She was still very stubborn, but I tried my best! After a couple days of not sleeping well and continuing to try, I was able get her to latch. She was still irritated because my milk wasn’t coming out as quickly as her bottle. My daughter also ended up acting colicky and fussy. My pediatrician said she might have a sensitivity to eggs, flour, wheat, soy, and milk, so I changed my diet.

My home health nurse suggested I contact MilkWorks for some extra help. I was introduced to a nipple shield and tried putting the baby on while giving her some milk with a syringe. This seemed to work so I tried it a few times at home. This worked for several weeks and when she was a month old I was able to slip the nipple shield out and she was able to latch! I thought, “This is a victory!”

My challenges were not over, though. At about two months old, my daughter stopped wanting to latch again. I went back to the nipple shield and she never let go of it after that. I breastfed her with the nipple shield until she was 1 year and 2 months old. She weaned herself and it was amazing how close I felt to her. I feel like breastfeeding really connected us, especially after the rocky first month we both had. I loved breastfeeding and would do it all over again, even with the same challenges!

How did you learn about the Community Breastfeeding Educator (CBE) course?

My home visitation nurse, who knew how hard I worked to overcome the problems I had, thought it would be a great opportunity to get involved and learn more. I contacted Milkworks and I think it was a sign from God because I definitely feel that I can be an advocate for moms who need a small boost.

What do you enjoy most about being part of a group of women who provide breastfeeding support?

I love hearing about everyone’s similarities and differences in breastfeeding and I love knowing there are so many other women who also love to help moms. The more I learn from the other CBEs, the more I want to know.

Where do you work? How are you able to incorporate breastfeeding support in your position?

I work at Health360 Integrated Care Clinic as a Spanish Interpreter. I am able to incorporate breastfeeding support by interpreting for moms who have a communication barrier. I learn a lot from the providers and a couple of moms have contacted me outside of work when they realize I can help them.

What are the biggest challenges you feel moms face when it comes to breastfeeding?

I think the top three challenges that moms face most often are latching, not having enough milk, and the lack of support system. Often it takes just a small amount of time to help make a great difference for a mom when it comes to her parenting and breastfeeding goals.