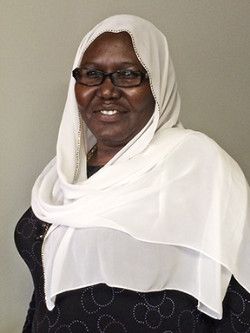 Khamisa, where were you born?

I was born in the city of Kadulgi in the Nuba Mountain region of the South Kordofan province in Sudan. My mother gave birth to 14 children, but several of my brothers died of the whooping cough when they were young. My father worked in an animal preserve in Sudan. I grew up in a large family home with my immediate family, as well as many extended family members.

What were your early memories of seeing the women in your family breastfeed?

All of the women in my family breastfed, not only their own babies, but the babies of other women who were part of our extended family. However, our customs dictated that if a baby breastfed from another mother three times and was satisfied, the baby could not marry the woman’s baby who was also nursing at the same time. My mother had meningitis when I was five weeks old and was very sick, so I was breastfed by my mother’s sister-in-law, Lakhbit. She became my second mother and during my early marriage days she was the one who handled my dowry. Lakhbit’s own children became my brothers and sisters and they were always there when I needed them.

I remember as a child keeping a journal and noting which babies nursed from another mother. This caused a conflict because later on the now grown up baby might not be able to marry someone because they were actually their milk sister or brother!

What was it like going to school in Sudan as a young girl?

In my home town, there was only one school for girls (ages eight to eleven) and only forty students were accepted. Our family lived across the street from the school and my father was friends with the head teacher. I often ran errands to the school and I would stay and watch the classes. The teachers noticed that I enjoyed school and offered me a place. My father had to alter my birth certificate in order to get me into school because I was only five years old.

In high school, I was selected to attend a boarding school away from home. I had to fly on an airplane to get to school. But my education there was disrupted by the war in Sudan.

How did the customs of your family impact your marriage?

When I was born, according to the customs of my family, I was engaged to one of my cousins, who was nine years old. My cousin and I had an agreement that if either of us wanted to marry someone else, we would tell each other. But we became close and made the decision to continue with our engagement. We eventually had eight children together.

When my youngest child was two months old, my husband joined the Sudanese People’s Liberation Army. I did not see my husband for eleven years while he served in the SPLA. During his time away, I worked as a teacher. Because of my husband’s role, the Islamic government suspected our family and watched us closely. My husband was able to get to Nairobi and call me. He suggested that we sell our land and travel to Egypt for safety reasons.

I left for Egypt on a steamer ship with my eight children. Because gold was considered an adornment for women and would not be stolen, I bought several pieces of gold for myself and my daughter. Selling the gold supported us while we were in Egypt awaiting refugee status and acceptance into the United States.

When did you come to Lincoln?

Catholic Social Services in Lincoln sponsored our family in 2000. I thought I would be coming to a city with high rise buildings and crowded streets, like New York City. Instead we arrived in Lincoln, which felt much like our home in Sudan. My husband was not able to join us until 2004.

We were one of the first Sudanese families in Lincoln. My children have all finished school and seven of them live in Lincoln. I have one son who is a construction engineer in California.

What are some of the breastfeeding practices in Sudan?

Babies are often given water with some salt and sugar in it for the first couple of days until a mother’s milk comes in. Some women do not breastfeed until their milk comes in, but I chose to breastfeed my babies right after they were born. Seven of my eight children were born at home with a midwife. My mother and sister were also present at my births. The first solid food a baby is usually given is a soup made from wheat flour and honey.

Getting comfortable while breastfeeding can be a problem for mothers in Sudan because many mothers have been circumcised. This makes sitting very uncomfortable after a baby is born.

Why are you so passionate about helping mothers to breastfeed their babies?

Breastfeeding is not just about milk. It allows a mother to be in tune with her children and learn about them because she is so close to them. This bonding builds a life-long relationship of trust and understanding between a mother and her child.

I feel it is very important to encourage and educate elderly Sudanese women to support breastfeeding as they often care for their grandchildren while their mothers work. It can be hard, because many mothers feel that they do not have time to breastfeed once they come to the United States.